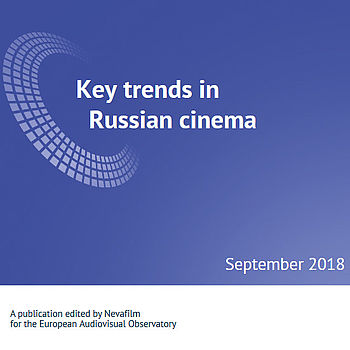 30% rise in the number of films released in Russia since the arrival of the digital age.

This new report - Key Trends of Russian Cinema – was presented on September, 19 in St. Petersburg by the Observatory and Nevafilm Research at the International Content Forum and KINO EXPO.

The report finds that:

A new European Audiovisual Observatory study of the Russian film market, carried out by Nevafilm Research, provides a comprehensive analysis of the development of the Russian film industry between 2013 and 2017. The study examines data on the state of film production, distribution, and exhibition. It also reports on actual and potential changes to relevant legislation.

I. Films on release in Russia – approx. 30% increase since the arrival of the digital age.

With the digital revolution complete, the number of films on general release in Russia has increased from 280–350 to 400–450. By 2016, a system of creative content distribution had also emerged in Russia, with up to 600 more titles shown as unique event cinema screenings.

II. The screen base in Russia and the role of subsidies – dynamic growth thanks to state funding 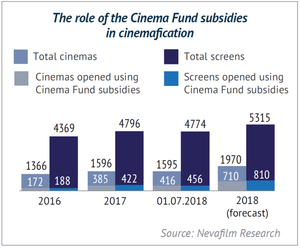 By the end of 2018, Russia will boast over 5,000 cinema screens, of which more than 800 will have received subsidies from the Cinema Fund (15% of Russian screens, 36% of cinemas). In other words, the cinema network may be growing, but there is increasingly little room for foreign films within it. 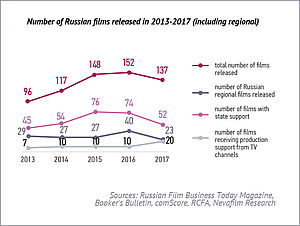 State financial support for film production is concentrated on an increasingly small number of big-budget films produced by leading studios. The market share for Russian films in distribution is therefore increasingly dependent on a small group of market players and projects. At the same time, producers have access to an increasing number of sources of income and investment: collaboration with TV channels, crowdfunding, foreign sales (which are particularly important given the weakness of the rouble), the development of video-on-demand services, thematic TV channels, and so forth.

Moreover, the creative diversity of Russian film production is expanding thanks to the creation of regional film clusters; producers based in the capital are able to diversify their risk by becoming involved in the activities of their regional colleagues and taking advantage of their support systems (film commissions and rebates).

IV. Film audiences in Russia – declining cinema audiences among young people due to popularity growth in VoD services and the demographic ‘gap’ 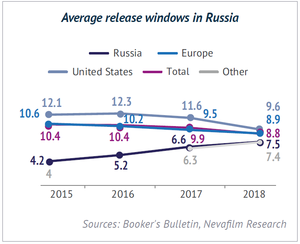 The number of young people in Russia is on the decline and young people are going to the cinema less than they used to. As a result of these two factors, young people make up an increasingly small proportion of cinema audiences.

Another reason for declining audience figures is that films are becoming easier to watch at home: the window between a film’s theatrical release and its digital release is shortening, falling from 10.4 weeks in 2015 to 8.8 weeks in 2018. Interestingly, while Russian producers are making the release window for their films longer, producers from the USA and Europe are in fact shortening it.

In general, federal executive authorities are playing a more prominent role in regulating the Russian cinema market and the activity of its players, and the impact of this (both positive and negative) is being felt across all subsectors of the industry. Non-monetary forms of protectionism are developing, including regulating release dates, applying more lenient age ratings to Russian films while applying stricter ratings to foreign films, and expanding the network of cinemas with the help of state support.