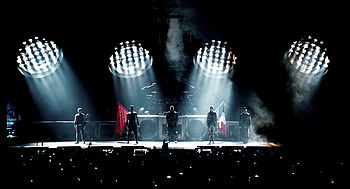 The exclusive world cinematic premiere of the concert RAMMSTEIN: Paris took place on 23 March 2017. This art project from renowned music director Jonas Åkerlund was distributed in Russia by Nevafilm Emotion.

The exclusive world cinematic premiere of the concert RAMMSTEIN: Paris took place on 23 March 2017. This art project from renowned music director Jonas Åkerlund was distributed in Russia by Nevafilm Emotion.

The Russian premiere was a resounding success. The concert film was shown in more than 80 cities and 200 cinemas. RAMMSTEIN: Paris became the most popular one-off showing of alternative content in Russia, collecting box-office returns of more than RUB 21.6 million. It was seen by 39,500 cinemagoers.

In addition, from a technical standpoint, RAMMSTEIN: Paris is the first Russian cinematic release in the new packaging and distribution format SMPTE DCP, which is replacing the Interop DCP format.

Kinosfera IMAX in Moscow is the only cinema in Russia with the multichannel concert sound system FUNKTION ONE, which was installed specially for the RAMMSTEIN: Paris premiere, resulting in a magical show with powerful sound on a giant seven-storey screen. Some regional cinemas, including Passage Cinema (Ekaterinburg), Nebo (Imperiya Grez network, Nizhny Novgorod), and Star & Mlad (Voronezh), delighted Rammstein fans by showing concerts in screens with fantastic Dolby Atmos sound technology.

Almost every cinema that participated in the exclusive screening of RAMMSTEIN: Paris offered special themed deals and events for the band’s fans. Oktyabr cinema in Moscow, the biggest in Europe, offered the most authentic ‘Rammstein Day’, featuring a spectacular fire show, themed street art created by talented graffiti artists, a tattoo studio in the style of the concert, and an unprecedented giveaway of exclusive gifts from Rammstein: from a spectacular steel box containing vinyl records to concert posters signed personally by the band. The success of this event, as well as the phenomenal success of the RAMMSTEIN: Paris screenings, shows how much our compatriots love this group and the level of enthusiasm they have shown about going to the cinema to immerse themselves in the creativity of their favourite musicians.